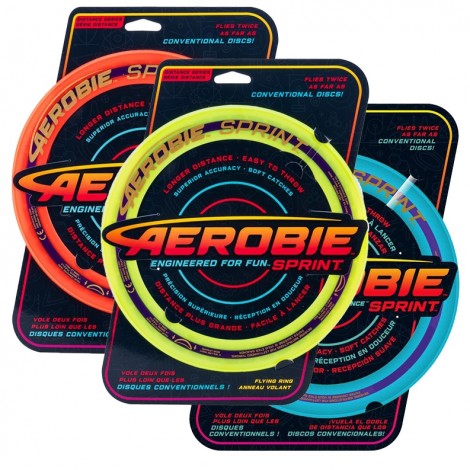 
The Aerobie Sprint flying ring, a compact version of the world's farthest thrown object, flies twice as far a regular disc for awesome games of catch.

Compact and lightweight, the Aerobie Sprint ring flies twice as far as conventional flying discs for awesome games of catch. Its smaller size is its only distinction from the otherwise identical Aerobie Pro flying ring, which was used in setting a Guinness World Record for the longest throw. Ideal for those who enjoy the incredible flying performance of Aerobie rings but have a smaller area for play, the Sprint ring is great for backyards, parks, playgrounds, beaches, and camping trips. The ring's soft rubber edge makes it comfortable to catch and fun for throwers of all skill levels. Size: 10 inch diameter. Quality made in the U.S.A. As with all Aerobie products, the quality is spot on. This Frisbee is supplied on a backing card suitable for Euro Hook hanging.

Also try the Aerobie Pro flying ring, a larger model of the Sprint ring which was used in setting a Guinness World Record for the farthest throw.