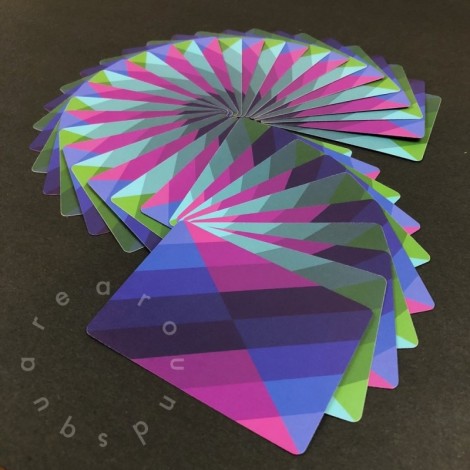 Aroundsquare's v2 Concept Deck is the much anticipated follow-up to the long-since-sold-out 2016 v1s. The original Concept Deck was developed in 2016 as a design experiment, a "proof of concept". The goal was to set aside the conventional standards and styling, and to design a card deck purely for cardistry. Recognizing the art of cardistry as the manipulation of cards to produce striking visual effects, and seeing this as distinct from other forms of card handling, such as magic and casino games, Aroundsquare sought to produce a card design that would unlock the full potential of a card deck to produce visual effects. The quest to produce a card purely for this purpose resulted in a string of design decisions that, collectively, have resulted in a truly distinctive deck design.

The first decision was to drop the standard card faces, numbers, suits, and pips. If the cards are not being used for card games or magic tricks, then there is no need for this visual clutter. Instead, AO2 has used the entire printable area, front and back, for the sole purpose of visual effects. All cards in the deck are identical.

The second decision was to think of the deck as a system, rather than a collection of individual cards. While each card is richly printed and sufficiently interesting on its own, the Concept Deck is designed so that the cards will work together, front and back, layered, fanned, flipped, and spread, to produce visual effects that are more than the sum of their parts. The intricate and subtle details of many artistic decks are lost during flourishing, so instead, Aroundsquare opted for big, bold, solid blocks that can be perceived quickly by the eyes. These blocks of colour can be manipulated to blend together, to contrast with one another, and to bend perceptions of space and create 3D effects.

The third decision was to drop the standard borders found on most cards, in favour of a full-bleed design with edge to edge printing. This creates a sense of unity and fluidity during flourishing, while the geometry and contrasting colours retain the separation of space and sense of movement during cuts. Perhaps more importantly, the borderless design also allows for fans and spreads in which the visual field is uninterrupted.

The fourth decision was print the cards with the same geometric pattern on both sides, but with contrasting colour palettes. The result is quite striking during flourishes, and can evoke a very different look and feel depending on how the cards are displayed. Because the geometric pattern is the same on both sides, the alternation of colour between the two sides during flourishing can create very interesting effects.

The fifth design decision was the card art itself, which uses a simple geometric pattern that is rotationally symmectrical, but still allows four distinct corner patterns to be displayed. As a result, four different fan patterns can be created, using either side of the cards, making a total of eight simple fans possible, and many more if the cards are shuffled or layered, or if the grip is shifted during fanning. This artwork has also been designed to create uninterrupted patterns when laid flat, opening up interesting possibilities for table work.