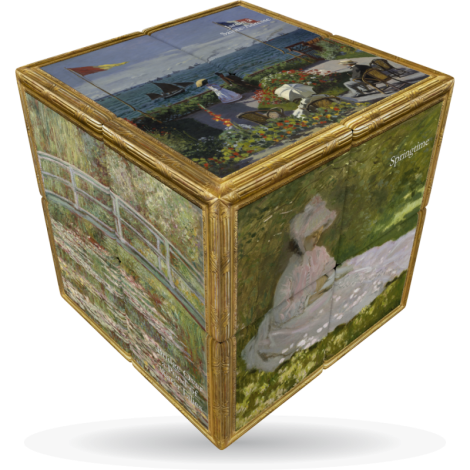 
Oscar-Claude Monet (14 November 1840 – 5 December 1926) was a founder of Impressionism, a 19th century art movement, which was inspired by a group of French painters. He was the most consistent and prolific practitioner of the movement's philosophy of pursuing an art of spontaneity, sunlight and colour. The name of the style "Impressionism" is derived from the title of Monet’s painting Impression, soleil levant (impression, Sunrise), which was first exhibited in 1874. Monet's ambition of documenting the French countryside led him to adopt a method of painting the same scene many times in order to capture the changing light and all the seasons.

This clever, patented puzzle cube celebrates some of his works, including of course, the water lilies. High quality printing has been used to replicate the masterpieces in this 'sticker-less' design.This custom V-Cube is supplied in a signature 'Art Emotions' Box and has been manufactured to the highest quality possible. Made in the EU.
Follow Us
Subscribe to Newsletter